BLOOMBERG — The total number of electric buses in service is forecast to more than triple, from 386,000 last year to about 1.2 million in 2025, equal to about 47 percent of the worldwide city bus fleet, according to a report from Bloomberg New Energy Finance.

​“China will lead this market, due to strong domestic support and aggressive city-level targets,” wrote Aleksandra O’Donovan, an analyst for BNEF and author of the study. By 2025, the report said, the country will account for 99 percent of the world’s battery-powered buses.

Electric buses remain more expensive up front than those fueled by diesel or compressed natural gas, but BNEF found that battery-powered buses can already offer a lower total cost of ownership when fuel and maintenance expenses are considered. Projected declines in battery prices will make the upfront costs of some electric models competitive with a diesel version by 2026, according to the study. 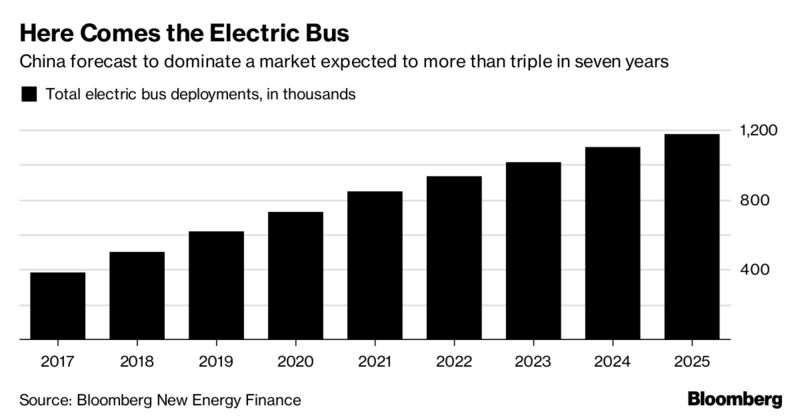 ​Public buses are a key part of the urban transit infrastructure, and the fact that they serve routine, fixed routes makes them ideal for electrification. Cities across the globe increasingly see electric buses as a way to reduce local air pollution, and such municipalities as Paris and Amsterdam have set goals to switch to zero-emission buses in the coming years. Earlier this week, mayors of some of California’s largest cities, including Los Angeles and San Jose, urged the state’s environmental regulator to introduce incentives and requirements to spur a shift toward electric buses from ones that use diesel or natural gas.

Thank you to our friends at Bloomberg for providing the original article below:

ABOUT US
Sundrenched News: Journalism that delivers the latest solar news and clean energy innovation. We are a voice for organizations, people, and technology in solar and other renewable energies that advance our global society toward a thriving, just, and sustainable planet for all.
FOLLOW US
© Sundrenched News - All rights reserved.
MORE STORIES