BLOOMBERG — As attractive a renewable-energy concept as wind power is, it’s plagued by a fundamental flaw. It blows the most in the dead of night, precisely when there’s the least demand for electricity. That’s true for just about every wind-blown spot across the U.S., from the foothills of the Tehachapi Mountains in California to the coastal plains of North Carolina.

And then there’s South Texas.

It is to wind, engineers have discovered in recent years, a bit like what Napa Valley is to wine and Georgia is to peaches. For not only does the state’s Gulf Coast generate strong evening gusts, but it also blows fiercely in the middle of the day, just as electricity consumption is peaking.

It’s the result of something called convection currents—a phenomenon caused by the gap between the temperature on the water and land—and it’s allowing wind farms owned by Apex Clean Energy Inc. and Avangrid Inc. to tap into the midday spike in electricity prices that comes as air conditioners start to hum. 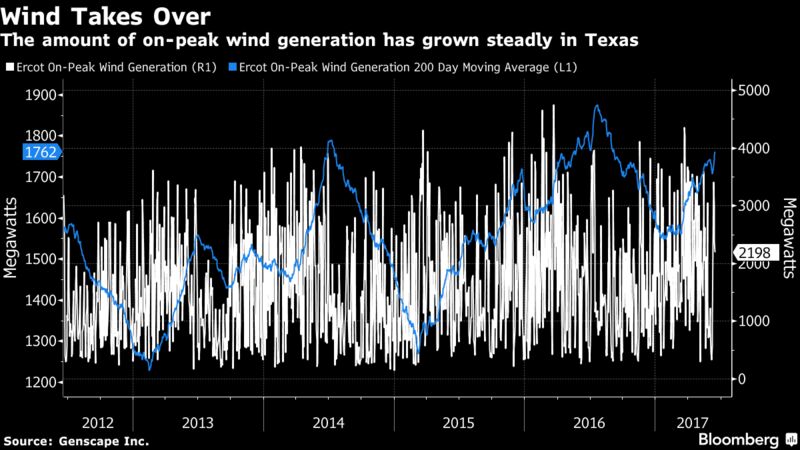 In the cut-throat Texas energy market, the construction of these coastal wind turbines—some 900 in all—has had a profound impact. It’s been terrific for consumers, helping further drive down electricity bills, but horrible for natural gas-fired generators. They had ramped up capacity in recent years anticipating that midday price surge would mostly be theirs, not something to share with renewable energy companies. Without that steady cash influx, the business model doesn’t really work, the profits aren’t there and companies including Calpine Corp., NRG Energy Inc. and Exelon Corp. are now either postponing new gas-fired plants or ditching them all together.

Wind power “is a disruptive technology and it’s increasing,” said Paul Patterson, a utility analyst at Glenrock Associates LLC in New York. “That’s a problem for other resources that are competing in that market.”​​And it’s not just the coastal turbines that are cutting into gas-fired plants’ business. When inland farms are included, wind power now supplies about a fifth of Texas’s electricity market. Solar power is also growing in the state. All of this helped push the average on-peak price set by Ercot—the grid operator that controls most of the Texas market—down 55 percent the past five years to $25.34 per megawatt hour, according to data compiled by Genscape Inc. 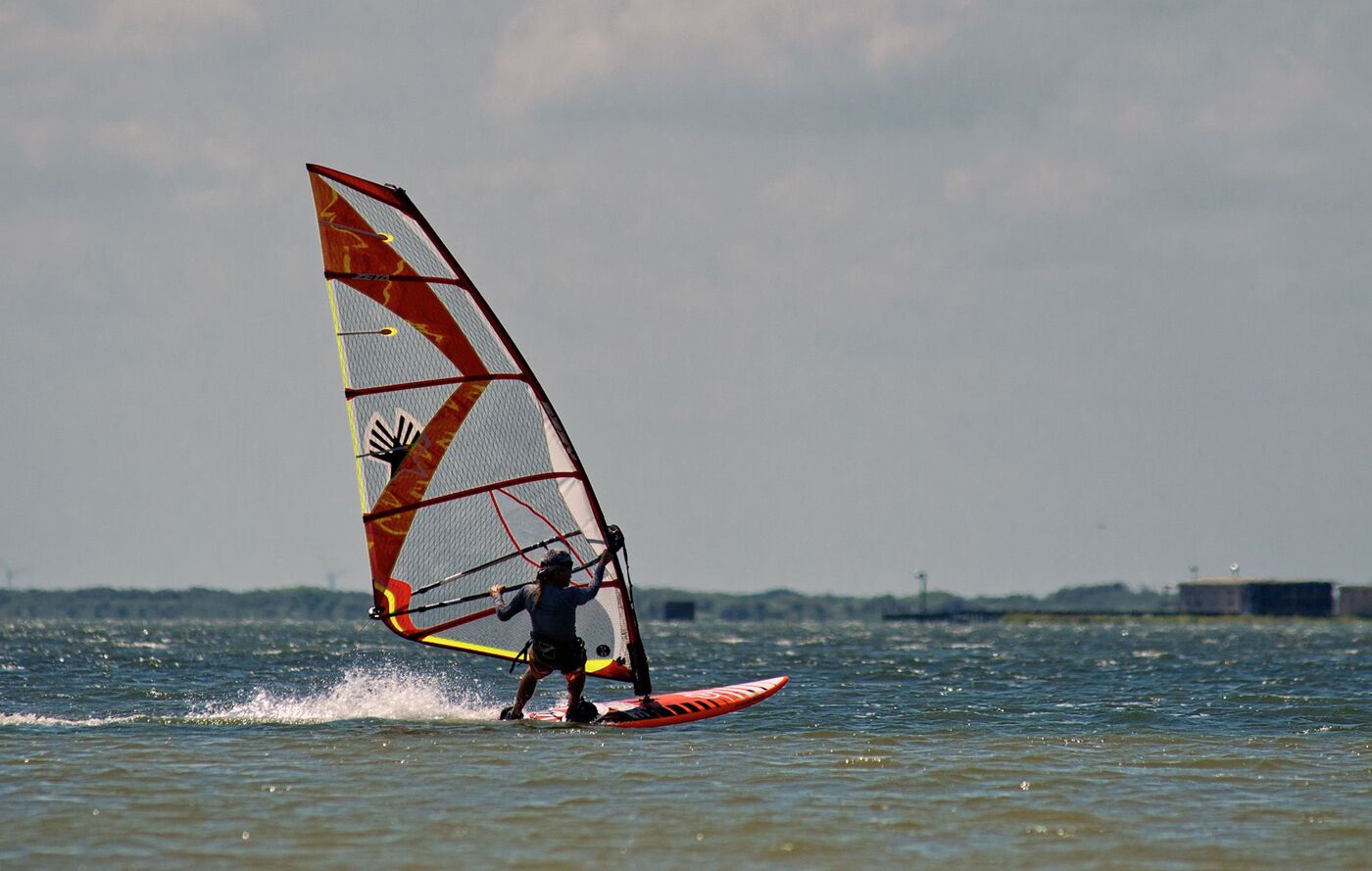 ​A windsurfer sails at the Laguna Madre by Worldwinds Windsurfing, located in the Padre Island National Seashore at Bird Island Basin on the South Texas coast.​

Clean energy is also grabbing a bigger piece of the market nationwide: By 2040, renewable resources such as wind and solar power will supply just as much of America’s electricity demand as gas, according to a Bloomberg New Energy Finance outlook. Globally, the cost of renewable power is dropping so quickly that gas will never become the dominant fuel, the report showed.

Many of the Gulf Coast turbines are clustered amid cattle ranches in a spot not far from Padre Island, a 130-mile-long barrier reef famous for its white-sand beaches, water parks, sea turtle-watching and windsurfing.

It is that last pastime that served as something of an indicator to turbine operators that the wind power here was going to be a bit different. Randy Rhodes, the manager of Worldwinds Windsurfing Inc., said he’s traveled all over the U.S., Mexico and the Caribbean searching for killer winds and “the Gulf Coast is the best.” He knows all about convection currents, or thermal winds as he refers to them, and can lecture at length about the topic.

“When the land heats up during the day, the difference in temperature sucks the colder air from the Gulf to the land, and that’s when we get the stronger wind,” Rhodes said. “We’ll get a bump in the afternoon of another five miles per hour or so because of that thermal.”

It’s not that there isn’t a gap in land and sea temperatures elsewhere in the U.S. but it’s just typically not as pronounced as it is Texas. “If you’re up in the northeast, even though it gets pretty hot in the summer, you still don’t have the delta between the temperature variances as great as you have along the Texas gulf coast,” said Jeff Ferguson, senior vice president of development at Apex, which has five turbine projects in the area. “It’s just a perfect place to develop a wind resource.” 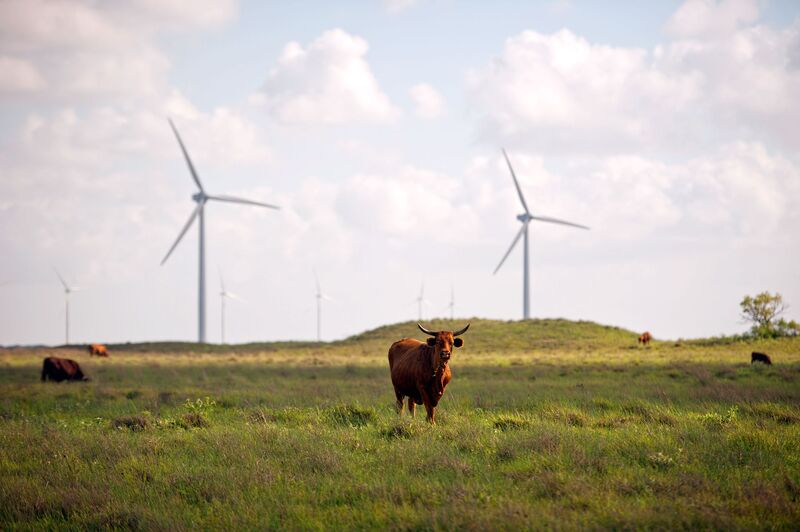 Wind gusts can reach higher maximum speeds elsewhere in the country, but again, those tend to come at night, when they’re less valuable (storing renewable electricity for later use remains a costly endeavor).

If there’s one bit of good news for the beleaguered Texas gas-fired plant operators, it’s that there aren’t a lot of new coastal wind projects in the works. That’s because the market is so oversupplied that it’s even difficult for the wind guys to make money at these electricity rates. And besides, it’s hard to acquire land by the water at reasonable prices.

Thank you to our friends at Bloomberg for providing the original article below:

ABOUT US
Sundrenched News: Journalism that delivers the latest solar news and clean energy innovation. We are a voice for organizations, people, and technology in solar and other renewable energies that advance our global society toward a thriving, just, and sustainable planet for all.
FOLLOW US
© Sundrenched News - All rights reserved.
MORE STORIES