FORBES — “There’s going to be a lot of excitement around batteries in the next five years. And I would say that the country will get blanketed with projects,” said Spencer Hanes, a managing director of business development with the Charlotte, North Carolina-based utility.

“With the way that the cost curves are coming down it’s a big opportunity for all of us to deliver what customers want.”

What customers want, it seems, is solar-plus-storage. They want it enough that homeowners are propping up the battery business even before it can make them money, said Adam Gerza, chief operating officer of the solar software firm Energy Toolbase.

“The momentums and drivers behind actual installed solar-storage projects are things like backup power and energy independence, and there’s a little bit of a screw-my-utility kind of attitude,” Gerza said, sitting alongside Hanes on a panel Thursday at Solar Power Midwest in Chicago. “In one word, it’s almost like emotion.”

Most homeowner projects don’t yet make economic sense, Gerza said. “There’s actually a pretty big subset of people that still want to do it anyways. So that’s happening, and frankly we need those creative use cases because purely from an ROI (return-on-investment) perspective it doesn’t make sense just yet.”

But sometimes it does make sense, according to Troy Miller, the director of grid solutions for S&C electric, a manufacturer of grid components.

“I think there are cases where it does make economic sense today, and they’re only going to grow,” Miller said, predicting market increases over the next five years in all three sectors: residential, commercial and industrial.Prices have dropped from about $800 per kilowatt hour in 2012 to $281 in 2016, Hanes said, and are expected to continue to fall by 9 percent per year. The prices are driven down by the electric car industry, and while most of those electric cars are being purchased in Europe and China, the U.S. is benefitting from the impact on the price of lithium-ion batteries.

“You’re going to see a cost decline that looks a lot like solar, and I think that’s going to benefit customers as we figure out how to deploy solar and storage,” Hanes said. “The good news is that the technology is now here where lithium-ion batteries and other batteries, they actually work now. They’re becoming more cost competitive.”

The missing piece, according to Hanes, is policy. Energy-storage provides value to the grid in many forms, including reliability, improved power quality, deferred maintenance, but policy makers and regulators have to find ways to extract that value.

“If a person wants solar plus storage on their home and it doesn’t make perfect economic sense—we all do things in our lives that don’t make economic sense,” he said. “The point is, the future is coming where it’s going to make sense, and we need to get ready for it and start developing the policies and the rules to let it happen.” 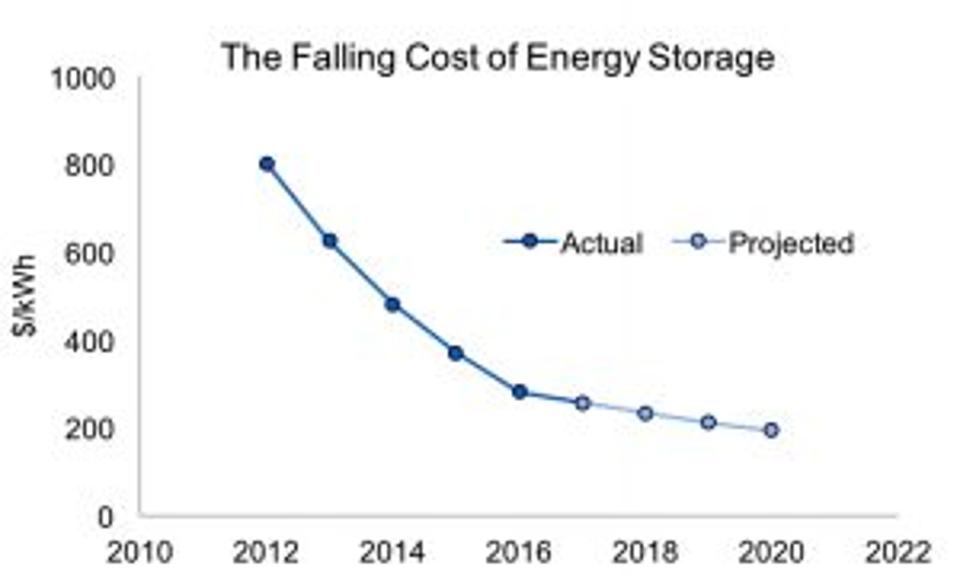 Thank you to our friends at Forbes for providing the original article below: